Moontan was first launched at the Wellington Fringe Festival in New Zealand in 1994, and subsequently in Australia at the Warana Writer's Festival in Brisbane. Now this book has become a motion picture staring Annette Devick from Canada and Mark Hudson from Australia (pictured).

Alan Clay's first novel, tells the story of the relationship between two clowns, Moontan and Crystal, as they become involved in an occupation of an old theatre which is 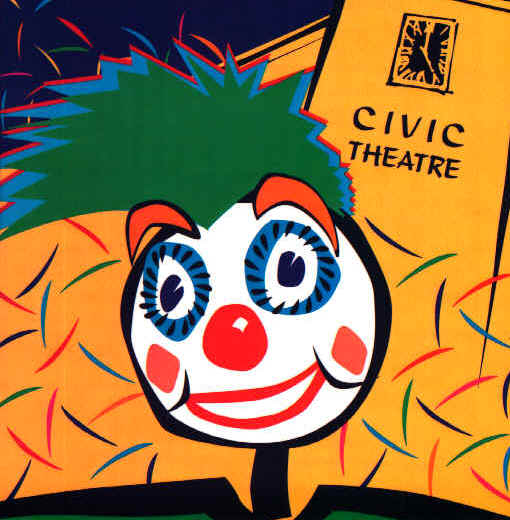 "This novel, which describes the occupation of the Civic Theatre by a collective of artists is simple but well-told. This book is enjoyable, the characters are few but convincingly portrayed, and the city of Auckland and the Civic Theatre itself are sketched in with a deft touch."

You can check out the first chapter on line, or read reviews of the book.

Why not also check out Dance Sisters, Alan's second novel, which is available as an e-book in MS Reader format.

, staring Annette Devick from Canada and Mark Hudson from Australia which was shot in New Zealand in October 2006.

And also the new comming of age romantic comedy, Courting Chaos, shot in Los Angeles in 2013, in which a Beverly Hills girl falls for a Venice Beach street clown named Chaos and she must overcome her inhibitions and become a clown herself for the relationship to survive.

This site published by Artmedia Publishing The content of this site is copyright, and no part may be reproduced or transmitted for commercial purposes, without the prior permission in writing from the publishers.

Artmedia is building a community of interest in contemporary Australian and New Zealand literary and Performing Arts - Click on this link to find other similar sites.

[The link bar feature is not available in this web]