This novel tells the story of a father and daughter team of sand-sculptors, who embark on a crazy adventure from Bondi Beach to a magic mountain in New Zealand, exploring the transient nature of art and life, to discover that dreams are real.

"Believers in Love is a powerfully creative work, with prose that sings like poetry. Beautifully told and evocatively rendered, Believers in Love comes very highly recommended."  See the full review from Wordweaving 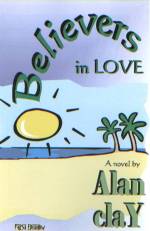 Sarah sat at the side of the road, with what looked like the contents of her pockets spread out on a towel before her.
"What are you doing?" her father asked.
"I'm fishing for trout," the girl told him.
The father looked amused, but said nothing, and determined to watch how the game proceeded.
Soon a passer-by stopped, and asked Sarah the same question.
"I'm writing a book." she responded.
Each person who stopped to ask, and the father counted fifteen in about ten minutes, was given a different answer.
"How many trout have you caught?" he finally asked.
"About fifteen in the last ten minutes," the girl answered.

Believers in Love eBook Release
Believers in Love has just been released as an eBook for the Kobo reader and the eBook can be purchased in New Zealand through Whitcoulls or in Australia through Borders or Angus & Robertson. It can also be purchased for the Apple iPad through the iBooks app at iTunes. (ISBN: 9780957884472)

The book has also been released for Amazon's Kindle Reader. This means it is available to be read on all mobile devices including the Blackberry, iPhone and Android phones, as well as for the iPad, Mac and PCs. Buy the Kindle edition for US$5.49 from Amazon.

Order this novel in paperback from bookshops or online stores like www.amazon.com.

You can also check out Australian Reviews or American Reviews of the novel.

"Light and yet profound, this novel is a most unusual find which all will enjoy and savor, long after the last page is turned. Art and living may be treasured repeatedly, but must yield to the next magical moment!"  See the full review from RightLifestyle

"A book about love, laughter and life. Not just a story, this is an exploration of emotion and philosophy. A novel of journey and self-discovery."     See the full review from AussieReviews 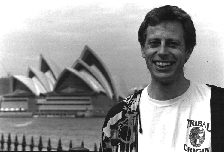 Born in 1954, Alan Clay grew up in Auckland, New Zealand. He studied clown in Sweden in 1977 and has taught and performed extensively in Europe, Australia and New Zealand. For the past ten years Alan has lived in Sydney, where he runs Playspace Studio, Sydney’s Physical Theatre Studio. ‘Believers in Love’ is Alan's third novel. His second Dance Sisters was published in 1997 and his first Moontan was published in 1994.

This site published by Artmedia Publishing The content of this site is copyright, and no part may be reproduced or transmitted for commercial purposes, without the prior permission in writing from the publishers.

Artmedia is building a community of interest in contemporary Australian and New Zealand literary and Performing Arts - Click on this link to find other similar sites.